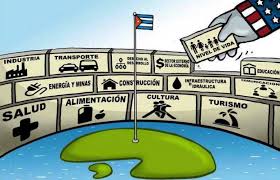 Fernando Leon Jacomino, Cuba’s Vice Minister for Culture, spoke to an international conference online in October, hosted by ICAP, the Cuban institute for international friendship, on the question: How does the US blockade against Cuba impact on the cultural sector? We summarise his speech here.

Probably the most visible impact of the blockade is in the limited circulation of art and literature – books and magazines etc. The blockade affects imported cultural products as suppliers close by are prevented from supplying to Cuba, the island must import from more distant suppliers which costs more in freight and also there are more risks involved. Cuba estimates a loss of 5-6 million dollars per year as a result of this increase in costs.

Cuba works on the principle of mass access to the best of Cuban culture within the country but as regards the impact of the blockade restricting production and distribution of their cultural products they estimate a loss of 12 million dollars per year.

For example, to make music products – CDs – they have to be partly made abroad – and the delays in distribution are demoralising for musicians – so they have been trying to resolve that by producing flash drives with music for distribution but even those have elements that need to be imported.

The blockade restrictions on banking operations, use of US dollars, also has a direct impact on foreign suppliers who are under pressure from the US. The culture sector estimates a loss of one million dollars a year as a result of these banking restrictions.

In order to upgrade and update technology in the cultural sector, including the factories and workshops of the cultural industry of the FCBC (the Cuban cultural wealth foundation, commercial arm of the Ministry of Culture), Cuba estimates losses of 1.5 million per year in this area.

A specific example of the extra costs involved is musical instruments. In art education there are 39 specialist schools across the country up to an including university level. All equipment is provided by the state. A high percentage of equipment has to be imported for example some brass and woodwind instruments cannot be made in Cuba – they have to be imported and cost a lot more due to the blockade. Also in the visual arts many paints for example are not produced in Cuba. Professional musicians also need specialist audio equipment and students require specialist instruments for example a student learning violin requires different sizes according to age. And the state guarantees every student will start with an instrument.

An important part of culture is cultural exchange.

Until 1959 the United States was the natural market for Cuban music (only 90 miles away) and there were many Cuban music records sold and distributed there, Cuban musicians who performed and toured there. Since 1959 the hostility and blockade meant that Cuban bands could not get paid for their work in the US.

Currently Cuban musicians still cannot sign contracts with US companies, at least, not via their Cuban representatives. So if a Cuban musician signs a contract directly with a US company their Cuban representative is prevented from representing him/her and the musician has no legal protection – they are entering the market at a disadvantage and that affects the value of their work negatively. Other artists, from Colombia or Argentina for example, are allowed to perform in many different spaces, such as theatres, universities, open spaces, but Cuban musicians are limited to the marginal spaces, have to work 2-3 times as hard to earn their money as there is a greater financial risk for the producer/programmer – so programmers are not so interested.

Cultural exchanges between Cuba and the US increased during the Obama administration – between artists as well as with the public – but under Trump there have been increasingly more obstacles put in place. It is now practically impossible for a Cuban band to make a tour in the US. Cuban musicians are discriminated against in that they can no longer apply for a US visa from Cuba, they have to go to a third country to make their application. That expense of travelling to another country falls on the artist or the producer that invites them to the US. That increases the costs for the project and if the visa is refused it is a cost that produces nothing. This is the same for all artists – ballet, dance, visual arts – all manifestations.

In 2016 there were 623 cultural exchanges between Cuban and US artists – in Cuba or the United States. In 2020 there have been only 32. That is not surprising it was low this year due to covid19 restrictions but in 2019 there were only 168 – last year the figure had fallen nearly 75% in 3 years – and many of the 32 this year were online anyway.

Finally, what has been happening recently has been the extreme politicisation of cultural exchange. Cuban artists are being victimised for the simple fact of having decided to live in Cuba. It is extremely unfair and they are being discriminated against for supporting their country.

What has been happening is data-mining of Cuban artists’ online presence, finding every photo of the artist alongside a Cuban leader, there is a whole media machine in the US that converts these ‘offences’ into ‘crimes’ – and the artists are then pressured into denouncing the Revolution. It is no longer enough for the artist to say nothing about politics, there is now a demand that these artists must speak out against the revolution and speak out more strongly and more offensively. Some of the people in the US behind this received their education in Cuba. We have had cases of our artists here receiving all types of abuse including via their phone. We support our artists against these aggressions.