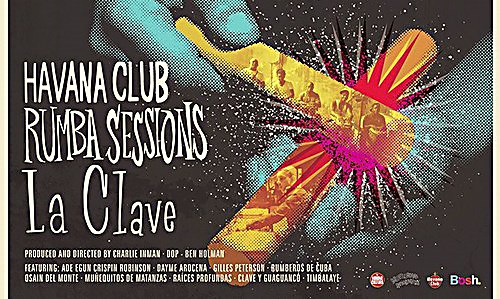 A fundraising night by Cine Cubano

The latest chapter in the longstanding relationship between Gilles Peterson, Havana Cultura and the music of Cuba, this feature-length documentary by Charlie Inman sees him explore the roots of rumba through interviews with leading figures of the rumba scene in Cuba — from Muñequitos de Matanzas and Clave and Guaguancó to Rumberos de Cuba, Osain del Monte, Timbalaye and Raíces Profundas.

Produced in collaboration with rum maker Havana Club – that created the Havana Cultura platform to promote contemporary Cuban culture –, it's another chapter in a six-year relationship that's already given vital exposure to different aspects of Cuban's thriving music culture. This film is about tracing the through lines running from slave communities' spiritual drumming practices, the dancers and musicians who've preserved those traditions, through to the younger generation who've plucked out and re-contextualised the elements most exciting to them.

The history of rumba, inextricably tied up with the slave trade, uniquely intertwines West African and Iberian musical styles. With roots in the Congo, Nigeria, Benin and Cameroon, different African religious institutions such as Ifa, Ekpe and Nkisi were remade in Cuba as Lukumi (Santeria), Palo, Abakua and Arara. As such, the religious and social realities instituted by the African diaspora have a distinct, if complex, connection to the rhythms foundational to contemporary club music.

(NB: If ordering a food inclusive ticket, food will be ready for the end of the film c.7pm)

Ticket sales will be donated to The Music Fund For Cuba, a UK charity which supports education and development of music and performing arts in Cuba.