Beat the blockade by supporting the Braille machines for Cuba appeal 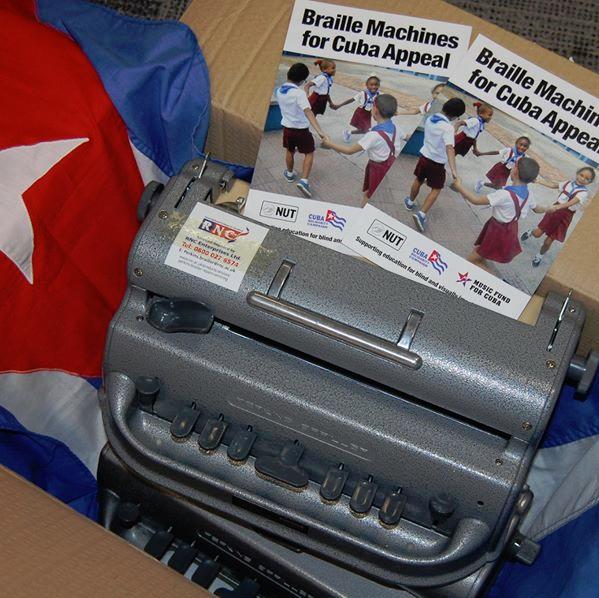 On 31 October, the United Nations General Assembly will vote on Cuba’s annual resolution calling for an end to the US blockade.

In advance of the vote, Cuba sent a report summarising the impact of the inhumane US policy against the island during the last year, including its impact on special needs schools.

The report, which outlined the total blockade damages to the Cuban economy at over $933 billion dollars, included the example of Cuba being unable to purchase Braille machines as they are manufactured and sold in the United States.

The Music Fund for Cuba and the National Education Union (NUT Section) have worked together on an appeal to help beat the US blockade by taking over dozens of Braille machines to be used in special needs schools on the island.

Later this month, 25 teachers from the National Education Union (NUT section), will travel to Cuba as part of their third annual delegation to Cuba. They will meet with their sister union SNTECD, visit schools and colleges across the island and meet with other Cuban organisations. The delegation, headed by union Vice President Amanda Martin, will be taking another 8 braille machines with them to support children at the Abel Santamaria School for visually impaired children and beat the US blockade.

Please support the public appeal with a donation. It costs £350 to send a refurbished Braille Machine to Cuba but all donations are welcome. Please make cheques payable to the Music Fund for Cuba (Braille appeal) and send to Music Fund for Cuba, c/o Unite, 33-37 Moreland Street, London, EC1V 8BB.

You can download the campaign leaflet here or get in touch at office@cuba-solidarity.org.uk / 0207 490 5715 if you would like some hard-copy leaflets to distribute within your networks.

Members of the National Education Union (NUT Section), in association with the Music Fund for Cuba, have raised more than £5,000 to send refurbished Braille machines to special needs schools in Cuba.

Although Cuba has an excellent network of schools for blind and visually impaired children, the US blockade causes many shortages in these schools. Materials and equipment often have to be sourced via third countries at inflated costs.

Braille machines, which can make an enormous difference to a child’s life, can cost up to three times as much to buy.

The appeal has now raised enough to provide Braille machines - refurbished by students from the Royal National College for the Blind in Hereford – to schools in all of Cuba’s fifteen provinces.

An NUT delegation visited one of the institutions which will benefit from the appeal in 2016. The Abel Santamaria School, which occupies the site of an old army barracks in Havana, provides specialised care for 145 students aged between 4 and 14 years old; 47 blind children, 8 deaf and blind and 90 with a visual impairment.

There are 64 teachers, including speech therapists and psychologists, and classroom assistants. Some of the teachers are also visually impaired.

UNICEF estimates that nearly 10,000 children with disabilities study in mainstream schools in Cuba. Schools such as Abel Santamaria are designed to serve as a transition towards integration into mainstream education.

Children are also taught how read and use Braille machines, and everyday life skills and hobbies, from cooking to carpentry and playing sports to learning a musical instrument.