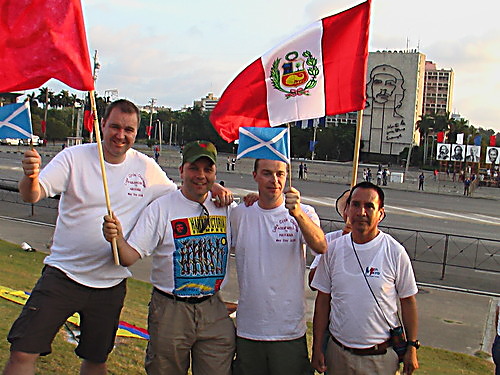 Neil, Alan and Tommy with Peruvian May Day delegates after finishing the cycle challenge in Havana 2008

Fauldhouse Miner’s Welfare was the unusual venue last week for the world premiere of a new documentary film. “Half the World Away – (from Addiewell to Havana via Fauldhouse) tells the story of three West Lothian men and their participation in the 2008 Cuba Cycle challenge.

Fauldhouse and the Breich Valley Councillor Neil Findlay and his two pals, Alan Brown, a joiner from Whitburn and Tommy Kane, a PHD student from Addiewell joined 16 other people from the UK to cycle 350km in five days through the towns and villages of Cuba raising almost £30,000 for the Music Fund for Cuba and a school for visually impaired children.

Prior to the first showing of the film Alan explained “we thought this event would be a unique experience and one that we would like to share with others. None of us had ever made a film or even held a camera before but we are delighted with the way it has turned out. Our editor Jon Mancini has done a fantastic job.”

The film follows the three in the lead up to, and throughout the duration of the event culminating in their attendance at the annual May Day event in Havana where over 1 million people gather to celebrate international workers day. Tommy explained “throughout the trip we saw at first hand how Cuba and Cuban society works. We saw the excellent health and education system, innovative organic farming methods and the way in which small local communities organise to help and look after each other. We hope that our film has successfully captured the real Cuba.”

Neil, Tommy and Alan now want others to see the film so that some of the myths about Cuba can be dispelled – Neil said, “Cuba is a third world country with first world social services. Our hope is that having visited and produced the film we will be able to show it to schools, community groups, trade unions and anyone with an interest in world development and social justice or even travel and of course cycling!”

If any school, community group or organisation would like to host a screening of the film, would like a copy or wish to discuss any aspect of this please contact Neil on 01501 770365 or email neil.findlay@westlothian.gov.uk

For details on how to take part in this year's Music Fund for Cuba Cycle Challenge contact info@musicfundforcuba.org.uk

Resources linked to this item:

Download Read Neil, Tommy and Alan's full report of their experiences on the May 2008 Cuba Cycle Challenge in doc format (1411 kb)