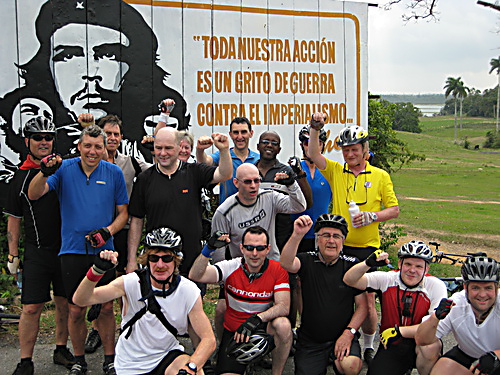 I was privileged to be one of 20 intrepid challengers who recently took part in the Cycle Cuba Challenge 2010 to raise money for the Music Fund for Cuba, a UK charity which supports education and development of music and performing arts in Cuba. The Fund was established in 2001 in memory of singer Kirsty MacColl who was inspired by Cuban music in her last album and loved the island, its culture and its people.

The day we flew to Havana was the first day that flights resumed after the volcanic ash cloud had grounded all flights and, unfortunately, several cyclists had been stranded and unable to reach Gatwick in time for the flight. Those of us who had been able to make it were incredibly relieved to be on the flight to Cuba and guarantee that the sponsorship raised would go towards the Miramar theatre restoration project as well as delivering essential educational and musical equipment to a school for visually impaired children in Havana.

The Cycle Cuba Challenge was a 365 kilometre cycle from San Antonio de los Baños to San Diego de los Baños in La Güira National Park. The route then passed through the lush forests of Sierra del Rosario and Las Terrazas, a UNESCO Biosphere Reserve, through the tobacco fields of Pinar del Río following the Viñales Valley, with its soaring limestone mogotes, onto the Gulf of Mexico with it’s pristine white sandy beaches, before retuning to San Diego de los Baños. The cycle involved 6 days of tough cycling up numerous long, steep hills which tested everybody to the limits. In addition to this the temperatures on some of the days was incredibly hot often making it difficult to breath up the steep hills. But every minute of the cycle was rewarding whether it was meeting and engaging with the Cuban people or just admiring the fantastic scenery.

When we reached Havana after the cycle, on the first day we visited the Miramar theatre, which is currently in the process of being restored. The whole of the restoration is being paid for by the annual Cycle Cuba Challenge. It is a fantastic project that is going to have a massive positive impact for many young Cuban’s in the local community. After it is restored, the theatre will provide a performance and rehearsal space for Havana's dance theatre, music and circus schools and as a much needed cultural centre.

We then visited a local hospital where we were shown around by the director, a doctor and some of the workers. The Director and most of the doctors had been in Venezuela as part of the Barrio Adentro programme, where Cuban doctors go to Venezuela to provide healthcare to thousands of people who had no access to healthcare previously. They were all immensely proud of their work in Venezuela. We were introduced to a number of student doctor classes in the hospital, and it was very noticeable that the majority of students were women. Cuba has a very proud record of equality and it could be seen clearly in the hospital. At the end of the visit, Pam, one of the cyclists, presented the Director with her bike for one of the hospital workers to use. That bike will make a tremendous difference to the Cuban worker that receives it.

The following day was perhaps the highlight of the trip for many people. This was the visit to the Abel Santamaría School for visually impaired children in Ciudad Libertad. We delivered essential educational equipment, including Braille printers, computer software and individual donations of musical instruments, a mixer, an equalizer. Many essential items cannot reach Cuba due to the blockade. We received, as elsewhere in Cuba, a tremendously warm and generous reception from the director of the school and the children, who put on a tremendous musical performance for us.

The Abel Santamaría School epitomises in the clearest way the Cuban philosophy of lifting every human being to their best potential. It has a ratio of one tutor per four pupils. Children with disabilities, such as those we met, are given every chance and encouragement to excel, and to be an integrated part of society. We were shown around the school and given an insight by the children and the teachers into the way that they are able to reach their full potential. It was incredibly uplifting to see the children being prepared to play a full part in society, rather that being dismissed for having a disability.

On the final day we were invited as guests to the May Day Rally in Havana by the Cuban government. This was an incredible honour for all of us to be part of and join over a million Cubans, with thousands of banners and hand made signs in the Revolution Plaza, expressing a strong identification with the gains of the Revolution over the last 51 years, a pride in Cuba’s achievements and their assertion of the right to self-determination. The rally was clearly a sign of the health of the revolution in Cuba and its achievements for the Cuban people.

At the start of the trip some of the group were sceptical about the progress that has been made in Cuba, at the finish everyone was convinced that Cuba was a far better society as a result of the revolution with all of us believing the achievements of the Cuban revolution, notably in health, education and culture, continues to inspire and clearly demonstrate, at a time of global economic crisis, that there is a positive alternative way forward for humanity. We would like to thank everyone that has sponsored us on the Cycle Cuba Challenge and helped the three of us raise over £25,000 and, in addition, donate much needed musical equipment to the Abel Santamaría School in Havana.