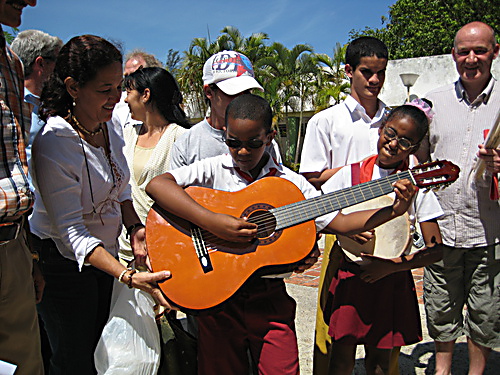 Handing over a guitar to one of the students

In May 2010, the Music Fund for Cuba signed a cooperation agreement with the Abel Santamaría School for blind and visually impaired children in Havana that will strengthen the charity’s long-term support for the institution.

Lying on the outskirts of Havana, the school provides specialised care for 145 children; 47 blind children, 8 deaf and blind children and 90 children with a visual impairment aged between 4 and 14 years.

It aims to integrate the children into main stream schools as soon as the child is ready by means of an outreach project which continues to support children at their high schools. There are 64 teachers, including speech therapists and psychologists, and classroom assistants. Some of the teachers are also visually impaired.

The school, which occupies the site of an old army barracks, has several classrooms and they have just refurbished the nursery. The computer classroom includes specialist computers, Braille printers and specialist software purchased with funds raised by the Music Fund for Cuba’s Cycle Cuba Challenge. Sponsorship has also been used to purchase each child a speaking watch and calculator and provide educational and musical equipment in the Art and Music rooms.

The school was named after Abel Santamaría, one of the martyrs of the Cuban revolution who helped lead the attack on Moncada Barracks, Santiago de Cuba, on July 26, 1953. Captured during the attack, Abel was murdered in prison after being brutally tortured. He had his eyes gauged out by Batista’s henchmen. After the revolution, all schools and hospitals for visually impaired children were named after Abel Santamaría in his honour.

Every year the Music Fund for Cuba Cycle Cuba Challenge visits the Abel Santamaría school to deliver educational aid to the staff and students.