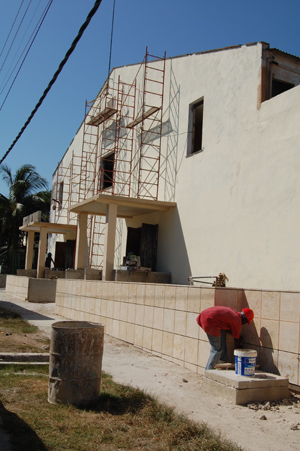 Building work on the Miramar Theatre, one of the priority international cultural investment projects for Cuba this year

The Cubainformation news website recently interviewed Luis Felipe Vázquez, Director of the Centre for the Coordination of International Assistance for Cuban Culture, who named the Music Fund for Cuba and the Miramar Theatre restoration project as one of the major works of international investment in culture currently taking place on the island. You can read the full interview below.

It is well known that literature and the arts are areas of Cuban society that make a major impact on the population; and teaching different branches of the arts make up part of that aspect of life on the island. The sustained efforts made by the Cuban government to supply funding to maintain such activities in addition to the upkeep of cultural facilities and institutions, many of which belong to Cuba’s historical heritage, have been widely reported.Despite these efforts and the priority given to arts funding, the grants coming from the state to support such projects have been inadequate. For that reason, in 2006 it was deemed necessary to found the Centre for the Coordination of International Assistance for Cuban Culture. Since that date until the present this organisation has done sterling work in the management of resources which have been used to complement the financing needed by significant projects being undertaken by the Ministry of Culture.Luis Felipe Vázquez Vázquez, the Centre’s director, agreed to meet me so that I could find out more about the work of his institution, the way it functions, its aims and recent successes, among other topics.What is the Centre for the Coordination of International Assistance for Cuban Culture?Our Centre is an organisation attached to the Ministry of Culture and linked in its manner of functioning to the Ministry of Overseas Commerce and Foreign Investment, a leading organisation in the area of dealing with international assistance to this country.

This Centre was formed with the principal aim of organising the management of funds received from abroad to support cultural projects and programmes and arts’ institutions in Cuba. The idea is to maintain the vitality of Cuban culture by complementing the arts’ funding provided by the state.