Miramar Theatre to open in March 2012 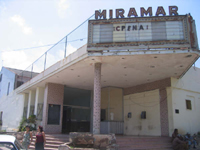 Exterior of Miramar Theatre in 2006. New exterior will be revealed at the end of march 2012!

After almost seven years of fund raising the Music Fund for Cuba (MFFC) is proud to announce that the Miramar Theatre in Havana will finally open its doors to the public on 30 March 2012.

Two gala opening concerts on Friday 30 and Saturday 31 March will be a wonderful celebration of Cuban music and dance. As well as featuring a host of musicians, dancers and performers from the National Schools of Music, Arts and Dance, a number of international Cuban stars will also perform on the day. Full details will be announced on this site shortly.

All supporters are welcome to attend the concerts if they are in Havana, just contact the Music Fund in advance for details.

The new theatre and the opening events represent a concrete example of 50 years of solidarity and friendship between the people of Britain and Cuba.

The project dates back to 2006, when the National Centre of Arts Schools (CNEArt), the Music Fund’s partner organisation in Cuba, proposed the renovation of the Teatro Miramar as an important project for arts education and development in the country. Aside from the obvious importance of the theatre restoration for the local community, CNEArt believed it would be a vital resource for arts students – providing a rehearsal and performance space which previously did not exist. But the potential of the project is more far-reaching. Teachers and officials at CNEArt see the theatre as becoming a bridge between arts and the community - with students themselves taking art to the local people, through workshops and education projects as well as performance.

Fundraising began in 2006 when the Music Fund for Cuba launched the Project ‘Teatro Miramar’. Then, the estimated cost of the project was around £200,000. However because of delays, the 2008 hurricanes, currency fluctuations and increased material costs the final target is just over £350,000, an enormous amount for our small charity. Yet miraculously and due to the incredible generosity and hard work of people across the UK we are proud to announce that we have almost reached our target. Indeed £311,000 pounds has already been sent to Cuba and we are closing in on the final 10% of funding needs.

“This fund raising appeal truly has been a miracle. When we set out we had no real idea of the size of the task ahead. But people have been wonderful and inspirational in their fund raising efforts and their generosity. In all over 600 different people and organisations have contributed directly to this appeal. Every one of them can be proud of this achievement.” Rob Miller, Charity Director.

The results will see the rebirth of this Havana landmark building. Once again the theatre will resonate with the rhythms of young artistic endeavour. The 500-seat Miramar theatre was built in the 1950s before the revolution, in the Playa district of Havana. Initially a musical theatre then a cinema, after the revolution it continued to be used as the cultural centre for the local community but stopped public performances 15 years ago due to disrepair. Close to the offices of CNEArt and the National School of Arts, it has been used for rehearsals by young bands, circus and dance groups but its new role will be so much more.

“For us it is a dream to have this theatre working again. It will be a beautiful link between the schools and the local community. If the Music Fund can help us do this it will be simply a dream come true.” Mayle Benitez, CNEArt

HELP US REACH OUR FINAL TARGET
How you can help:

2. Sponsor a seat in the Miramar Theatre with your name or dedication on a permanent seat plaque
3. Send a cheque made payable to the Music Fund for Cuba to: Music Fund for Cuba, c/o Unite, Woodberry, 218 Green Lanes, London N4 2HB

For more information about the Music Fund for Cuba, the Project Teatro Miramar, the opening concerts in Havana or anything else, please contact us anytime on info@musicfundforcuba.org.uk or call 0208 800 0155.